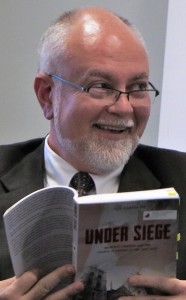 Canadian hockey hero Paul Henderson visited Parliament Hill today. In honour of his 76th birthday, and the unanimous motion of Canadian Members of Parliament requesting Henderson be enshrined in the Hockey Hall of Fame, following is an excerpt from my book Under Siege: Religious Freedom and the Church in Canada at 150 (1867-2017). Paul reviewed and approved the story as told here.

Commentator and former NHL coach Don Cherry has said that the most dangerous lead in hockey is 2–0. Each game begins 0–0. At that point in time, each team has a game plan that includes offensive and defensive strategies for each twenty-minute period. In ice hockey, no one starts the game playing for a tie.

The 2–0 lead is dangerous because it shifts the mindset of players and alters the game plan. The team with the lead starts protecting the two-goal margin and thinks about the potential for their goaltender to get a shutout. The result is the development of a siege mentality; the team that’s up 2–0 settles in to defend their own end while the team behind mounts a stronger offensive effort. It is difficult to transition from that siege mentality back to goal-scoring when, almost inevitably, the need arises.

I was twelve years old when the eight-game 1972 Summit Series took place between Canada and the Soviet Union. I watched every minute of every game as it unfolded. Game one saw Canada score two quick goals to secure the most dangerous lead in hockey. At the end of a 7–3 trouncing by the Soviet team, Canada’s finest looked shell-shocked.

Canada dramatically altered its lineup for game two and stormed back for a 4–1 victory. Everything was going to be okay. Or so we all thought. Two games later, after a tie and another loss, Canadians were booing their fellow Canadians as Team Canada left the ice.

What was about to unfold is worthy of Ripley’s Believe it or Not consideration. Toronto Maple Leaf Paul Henderson had a breakout thirty-eight-goal season in 1971–72, but a lot of Leafs fans, myself included, wondered about his selection to Team Canada. Until Henderson scored early in game one to give Canada the 2–0 lead. He scored again in game three to give Canada a 4–2 lead. That game ended in a 4–4 tie.

After game four, the series turned to four games in Moscow. The few hundred Canadian fans in the bleachers learned some limited Russian to chant the loudest sound heard on Canadian television sets over the next four games: “Da, da, Canada! Nyet, nyet, Soviet!” (“Yes, yes, Canada! No, no, Soviets!”) Those who made the journey had gone to great expense to demonstrate their national pride. The booing was over. (The Russian fans didn’t boo. They hissed.)

In game five, the first game on Russian ice, Henderson again hit the twine, lifting Canada to a 4–1 lead—before the team surrendered 5–4 to the Soviets.

All the Soviet team needed was one more win and they would claim world domination on the ice. If the remaining games tied, under European rules the Soviets would claim victory based on the goal differential. And home ice advantage was theirs for the next three games.

But with the series lead and home ice advantage came pressure to close the deal. The siege mentality set in for Team Soviet Union. They started to play not to lose.

What happened in the next three games would make Paul Henderson a Canadian hockey legend.

Game six started off as the most tenuous of the series. The first goal wasn’t scored until the second period. With the Soviet Union up 1–0, Team Canada stormed the net and scored three goals in ninety seconds. Henderson scored the third, which held up to be the game winner with a final score of 3–2.

In game seven, Henderson scored to break a 3–3 tie with just two minutes left in the game. Canada won 4–3.

Canadians proudly refer to “the goal,” also called “the sports moment of the century,” scored on September 28, 1972 in game eight. With a minute left in a game tied 5–5, the faceoff was in the Canadian end of the ice; all Team Soviet Union needed to do was hold on. As the Canadian team rushed down the ice, Paul Henderson felt a prompting and called Peter Mahovlich to the bench. As Mahovlich arrived, Henderson leapt onto the ice. With thirty-four seconds left in the game, Henderson scored his improbable third game-winning goal in a row to secure Team Canada’s victory in the series 4–3–1. I still have the commemorative Summit Series picture book!

The letdown after the series left Paul Henderson searching for something more in life. He had the family, fortune, and fame many dream about, but something was missing. In 1975, Henderson surrendered his life to Jesus Christ. In 1984, he founded what is now LeaderImpact as a means of helping others who had found success in life to secure their foundation in Christ.

In battle, whether on the ice or in the theatre of war, it is essential to know that engaging the enemy will necessitate taking fire. Succeeding will also require a strategy of offense and the knowledge that barricading oneself in with the hope of outlasting the other side is a poor technique. It is the last line of defence, not driven by faith or hope, but by fear.