“When you come to a fork in the road, take it!” Yogi Berra was more than a Hall of Fame baseball player and manager. He salted the English speaking world’s dictoms with a unique wisdom.

How many decisions do we make each day, beginning with whether or not to get out of bed and not ending until we return to our pillows. Still, there arise situations that challenge our decision-making skills. 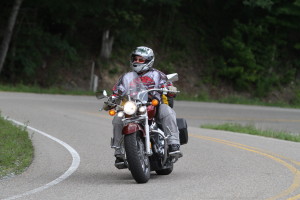 In Berra’s case, giving directions to where he lived – about halfway round a circular road that could be reached by going either direction from the fork – has inspired thoughts about one way of considering life’s decisions.

A decade and a half or so ago I decided to take a fork in the road and spend my Easter week at a youth conference at our church. I packed a garden kneeling pad to use as extra support for my attendance at the seating-on-the-floor-only event I would be attending with my then teenaged daughter. I wasn’t just going for my daughter though. The band delerious? was the featured music group at the Toronto Airport Christian Fellowship’s Fresh Wind Youth Conference. I had their Cutting Edge and King of Fools CDs and was willing to brave the 5,000+ teenagers to experience delerious? live. I had first heard their song History Maker shortly before Princess Diana’s death and was moved to tears by the lyrics when I heard them again on August 30, 1997:

Is it true today
That when people pray
Cloudless skies will break
Kings and queens will shake?

A few years later, at Fresh Wind, I was surprised that the History Maker lyrics moving me to tears were further on in the song, in the chorus – past memories of the death of a princess never met and presenting a deep personal challenge for a future not yet encountered:

I don’t recall how many times we sang that song over the course of several days, but every time it brought me to tears with a growing passion. Privileged to enjoy a private meal with the band, I shared in conversation with Martin Smith the profound impact his song was having on me. He was humble about it, acknowledging that the song had impacted him too, both in writing and performing it. He expressed wonder at the number of people sharing a similar response.

My life took a few twists and turns at forks in the road after that conference. I’ve had the privilege and honour of meeting, occasionally influencing, people who we already know will be recorded as history makers when our contemporary time becomes regarded as history… and maybe some whose names are not yet as well known. Some have suggested I’ve become one of those between the lines, hidden history makers myself.

Along the way, I permitted an unhealthy transition in my own life.

In 2006, I joined the leadership team of The Evangelical Fellowship of Canada as a “sent one.” Sent one is a term my friend Jack Frost, co-founder of Shiloh Place Ministries with his wife Trisha, used to describe the style of interaction we have in our work when our family is supportive of, even passionate about, what we’re doing. But I allowed myself to become a “went one.” Went one is the term Jack used to describe a person who becomes absorbed in their work beyond the support of their family, loved ones and advisors. Sometimes, being a went one manifests as working consistently beyond healthy capacity. Other times it manifests as overcommitting or taking on unnecessary risks. And, still other times as taking on in our own strength that which we have not been called to do. There were elements of all of these things in the place I had arrived at.

I compromised life balance for work/life balance. And, once you accord your work equal standing with your life you’re in trouble! And I was. When the solution to workload becomes sacrifice of personal health (sleep, exercise, time off) and/or family relationship (time, attention, energy) then work has overtaken life and the urgent has supplanted the important.

That’s led to another fork in the road.

After a two week motorcycle tour of Eastern Canada, including visiting the last of Canada’s provinces that I had not been to previously, it was abundantly clear that I was overconnected to the network of people and organizations surrounding my life and underconnected to the most important people in my life.

So I’m taking the fork in the road.

For the next several weeks I’m checking in.

I know we usually hear that people are checking out – taking time away – but I’m checking in. I’m taking time with. With my wife, Gloria. With my daughter, Grace. With my grandson, John. With family, friends and advisors, confidantes and visionaries. Most importantly, I’m checking in with God. I’m 54 years old and desire to set the course for the next stage in the great adventure based on alignment with the effort He has made to shape my life to date. As Jack would have said, I want to be a sent one. (I miss Jack, Stan and others who have already completed the Earthly part of their great adventure with Christ.)

I don’t know what these weeks will look like. I expect I may need a little extra grace from folks who would normally have my ear, my eyes and my time as I re-set my priorities. Maybe, I’ll write about it. Maybe, I won’t. For my praying friends, your prayers are particularly appreciated during this time. For those who don’t believe in prayer, when you think of me think healthy thoughts for my future.

Looking forward to taking the next fork in the road; and arriving at the intended destination.