I believe the Bible. I don’t just believe in the Bible. That would be too simple. If you don’t have one on the shelf at home, the Bible’s existence is proved in a nanosecond with your google machine. 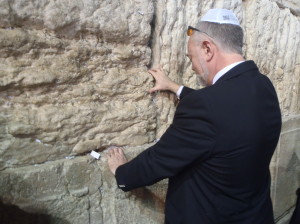 Don, praying at the Western Wall

I believe the Bible. I accept that the Bible expresses absolute truth and it applies to everyone’s life, kind of like absolute gravity. You don’t have to believe it for it to be true. The Bible is true.

I believe the Bible. Without it, there would be no history of creation or sound documentation of the true story of redemption. There would be only peripheral historical records of the life of Jesus of Nazareth, the Christ (Messiah); although, admittedly still more historical evidence than we have about the life of Julius Caesar and most Roman emperors. The Bible records personal history, including words that were spoken in a way as to be applicable between Jesus and you and me in the 21st century.

I believe the Bible. Its truth inspires me to be concerned about more than myself – people, nations and the planet.

Love the Lord your God with all your heart, soul, mind and strength is the greatest commandment. And, the second is like it. Love your neighbour as yourself.

Love your enemies and pray for those who persecute you.

Whatever you wish that others would do to you, do also to them.

Where your treasure is, there your heart will be also.

Not everyone who says to Me ‘Lord, Lord’ will enter the kingdom of heaven, but the one who does the will of my Father.

Do not judge, so that you will not be judged, since you will be judged in the same judgment that you make, and you will be measured by the same standard you apply.

If anyone would come after Me, let him deny himself, and take up his cross daily and follow Me.

There will be more joy in heaven over one sinner who repents than over ninety-nine righteous persons who need no repentance.

Let not your hearts be troubled. Believe in God; believe also in Me.

I am the Way, the Truth and the Life. No one comes to the Father except through me.

He who has ears to hear, let him hear.

And, of course, He said more. There is no way to read His words and deny His declaration of divinity.

There is no more inclusive message; and, no more exclusive claim on life for each and every person who accepts God’s offer of redemption.

I believe the Bible.