“People are almost always better in death than they were in life.” That’s how I started the thoughts I shared at my Dad’s funeral in April. It’s rare to hear negative words about someone at their funeral. My Dad was no exception. But like a fine wine, my Dad had improved with age so that he was a more special guy in life at the end than even he had been earlier. I miss him. 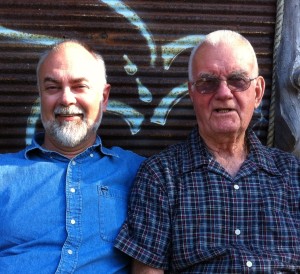 For a season in life I worked in a funeral home. We never had as many fresh cut flowers in our home as when I would pick through the discards at the end of the day and bring them home. Gloria would cut them and arrange them until she ran out of vases. There were simply too many flowers at most funerals to take them all to the cemetery; or, for the family to take home with them.

People also deliver flowers to the living for certain special occasions. Valentine’s Day. Mother’s Day. Birthdays. I forgot your Birthdays. But a florist friend in Vancouver noted they were never as busy trying to fill orders as for funerals. I should check with my florist friend in Ottawa to see if the same holds true on this side of the country.

Sometimes, the delivery of flowers is to a hospital. Still alive. Gratitude? Encouragement? Getting ahead of the funeral crowd?

One of the things often heard at funerals is that we need to send flowers – metaphorical or literal – more frequently to the living than for the dead. It’s a good idea.

I’ve reached the age of understanding that time, like a candle, gets shorter the longer it’s burning. I’ve passed the halfway mark in life even if I live as long as my grandmother, who made it to 103 (and might have had more in her if she hadn’t fallen out a window at 101; but, that’s another story).

I’m glad my last words with my Dad were words of love and appreciation, care and blessing. I do, at times, wish we had spent more time together, or talking on the phone or… well, those of you who have lost a parent know what I mean. I know I could have taken greater initiative; which is not an expression of guilt but an admission of fact.

One of my closest friends has had a reprieve from the cancer with which he was diagnosed. I admit that I felt honoured AND afraid when he asked me to accompany him to his doctor for a medical update. I cried when I first found out he had prostate cancer; and, rejoice with newfound appreciation for the time we get to share.

This past week, another close friend and I spent a half hour together clearing up a disagreement. Two days later, he had a stroke. Yes, I cried when I got the message. And more when I found out he’s going to be okay. I was glad our earlier conversation ended with the exchange of metaphorical flowers and look forward to spending time together, with a different edge perhaps than before.

All of this to reinforce what’s been said so often by so many. We need to send flowers – metaphorical and literal – more frequently to the living. It’s part of my plan going forward.