Below is the text of my presentation at the 7th Parliamentary Forum on Religious Freedom, held in Ottawa, Canada on October 1, 2018. 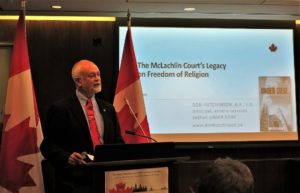 Reflection on Canada’s Supreme Court is often divided topically and into eras based on Chief Justice.

A brief look at the constitutional understanding of religious freedom in the era of the McLachlin Court from January 2000 to December 2017, [1] suggests a generally favourable trend.

In 2001, Beverley McLachlin’s Court recognized, “The diversity of Canadian society is partly reflected in the multiple religious organizations that mark the societal landscape and this diversity of views should be respected.” [2]

Her Court affirmed: religion has individual, group and organizational aspects [3]; that the state is not to be the arbiter of religious beliefs [4]; the state is not to compel behaviour in violation of religious beliefs [5]; and, that “nothing in the Charter, political or democratic theory, or a proper understanding of pluralism demands that atheistically based moral positions trump religiously based moral positions on matters of public policy.” [6] In fact, the Court concluded, “state neutrality is assured when the state neither favours nor hinders a particular religious belief,” [7] noting, separation of church and state is a United States’ constitutional concept, not one recognized in the Canadian context.

Sacred texts were determined not to be hate speech, in and of themselves. It’s what one does with those texts that may be hateful. [8]

The McLachlin Court was unanimous that “The protection of freedom of religion afforded by s. 2 (a) of the Charter is broad and jealously guarded in our Charter jurisprudence.” [9]

This fits within the narrative presented by the Chief Justice at McGill University in 2002. McLachlin there noted that in the claims of law and religion, “two comprehensive worldviews collide.” She gave voice to an attitude that it is the responsibility of the courts to find “in the comprehensive claims of the rule of law, a space in which individual and community adherence to religious authority can flourish.” [10]

For the most part, Chief Justice McLachlin oversaw judicial endorsement of a significant space for freedom of religion under the Canadian Charter of Rights and Freedoms.

What are the implications for our religious freedom of the four decisions from the final year of her Court?

In November 2017, the Court released its decision in Ktunaxa Nation v. British Columbia. [11]

The case involved a dispute about the sale of Crown land for a ski resort. Consultation with the Ktunaxa First Nation broke down over concerns development could cause Grizzly Bear Spirit to leave the traditional Qat’muk territory.

The Court split 7-2, concluding worshipers would not have their freedom to hold religious beliefs, or to manifest them, infringed if Grizzly Bear Spirit were to leave Qat’muk. The majority asserted the deity could not to be considered a Canadian citizen and, therefore, was not entitled to Charter protection from government action. Focusing instead on the adequacy of the constitutional aboriginal rights [12] consultation by the government decision-maker, the Court concluded the decision made was reasonable.

Deference to the reasonableness of the decision-maker was a trend in all four final-year freedom of religion related decisions.

On May 31, 2018, a unanimous decision was issued in Highwood Congregation of Jehovah’s Witnesses v. Wall. [13]

Wall was expelled from the congregation because of behaviour that violated membership requirements. He had, however, developed a real estate business reliant on his membership.

The Court found no underlying legal right that would allow for judicial review of the congregation’s decision, concluding it was not the Court’s place to assess or review the beliefs, practices or proceedings of a private religious organization. Without judicial review, deference was given to the private decision-maker.

In 2012, Trinity Western, a private Christian university, applied to the Federation of Law Societies of Canada and the B.C. Ministry of Advanced Education to establish a law school. Law societies are government authorized regulatory bodies for the legal profession. All Canadian law societies had agreed to a common standard for new law schools, delegating approval to the Federation. Both the Federation and Ministry of Advanced Education approved the new school. Three law societies balked at the approval. Two, B.C. and Ontario, ended up with Trinity Western at the Supreme Court of Canada.

The danger found in Beverley McLachlin’s 2002 assertion that “the comprehensive claims of the rule of law” establish the “space in which individual and community adherence to religious authority can flourish” played out in these two decisions.

The Court split 5-1-1-2. The majority granted special status to the legal profession, based on the comprehensive claims of law for lawyers, “to uphold and protect the administration of justice” and for “preserving and protecting the rights and freedoms of all persons.”

The Court did not overturn its 2001 decision in which it recognized religious institutions as a legitimate part of “the diversity of Canadian society,” constrained the government regulatory body for teachers from prohibiting private Christian education of teachers, and limited its authority to regulation of teachers after graduation.

However, five judges of the Supreme Court of Canada did pretzel their way around the 2001 affirmation of the Trinity Western University community’s freedom to belief and practice, based on a shared covenant. The Court re-conceptualized “the diversity of Canadian society” as the undefined Charter value called “diversity;” a value which two dissenting judges described as “entirely the product of the idiosyncrasies of the judicial mind.”

With law societies granted special status, no Charter right considered in issue to protect the religious community from the government regulatory body, and the need to breathe life into the Charter value diversity, the five abandoned the Court’s previously stated position on the need for actual harm, or even reasonably foreseeable harm [16], to ponder the scenario of a hypothetical LGBT student who, objecting to both Trinity Western’s beliefs and behavioural expectations, might find themselves seeking to study law at Trinity Western. What, the Court mused, might that mean for the reputation of the law societies? The majority decided it best to defer to the reasonableness of the law societies’ decisions.

Remember, the initial reasonable decision of all law societies was to let the Federation decide. These two decisions of the Supreme Court meant it was equally reasonable that twelve law societies approved of the law school as that two law societies did not.

Are these poorly reasoned decisions, in which the Chief Justice chose to write separate reasons, the last two of the McLachlin Court or first of the Wagner Court? Time will tell.

These decisions have, primarily, influenced attitudes; inspiring those who oppose religion, and disheartening worshippers concerned their religious freedom may be imperiled. But, these decisions of the Court did not alter the constitutional understanding of freedom of religion.

The final year of the McLachlin Court has not undone sixteen years of characterizing a generous constitutional space for religion, but it has generated unwarranted anxiety.

It remains for the faithful to overcome attitudes intolerant toward the religious, and to promote awareness of the robust freedom of religion guaranteed by both Charter and Court for faith to be embraced in private and expressed in public.

May we, the faithful, in our constitutionally affirmed “free and democratic society,” [17] engage the challenge to do so in the spirit of wise ambassadors, not unwary warriors. [18]

[1] Plus six months for the decision period permitted on cases heard in the closing weeks of her Chief Justiceship.

[6] Chamberlain v Surrey School District No 36, 2002 SCC 86, para. 137; see also the Chief Justice’s decision at para. 3 in which she notes on behalf of the majority agreement with Justice Gonthier’s statement in para. 137.

[10] Beverly McLachlin, “Freedom of Religion and the Rule of Law: A Canadian Perspective” in Douglas Farrow, ed., Recognizing Religion in a Secular Society: Essays in Pluralism, Religion, and Public Policy (Montreal, QC: McGill-Queen’s University Press, 2004). Her thoughts from that conference were published in full in this essay.

[14] 2018 SCC 32, McLachlin CJ writing a separate opinion agreeing with the conclusion of the majority.

[15] 2018 SCC 33, McLachlin CJ writing a separate opinion agreeing with the conclusion of the majority.