The Canadian Bible Society (CBS) is a nationwide network of people that started in 1804: over 70 staff; numerous volunteers who comprise regional and national board members, local church representatives and Bible distributors; and, thousands of generous donors who contribute to revenue of $10 to $12 million each year. 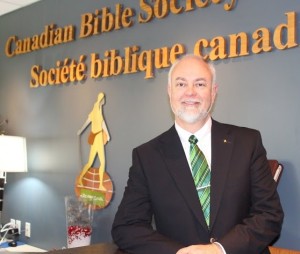 CBS is networked with churches and ministries, other Bible “agencies” that are active in one or more of the areas of CBS’ mission to translate, publish, distribute and provide tools for engagement with the Bible, and with the 146 member international United Bible Societies.

When the Chair of the CBS Board of Governors phoned me about the opportunity of serving as interim National Director and CEO earlier this year, I told him I would pray about it. I fully anticipated saying, ‘No.’ I live in Ottawa and commuting to the National Support Office in Toronto was not on my list of things to do.

But, I had agreed with my wife, Gloria, to pray about opportunities to serve that came my – our – way.

It was not my expectation that Gloria would suggest, while we were praying, that maybe God wanted me to do this. I responded that we needed to keep praying; because, I didn’t think she was hearing what God wanted. Again, I use the word “but.” But God – as St. Paul often wrote – had thoughts that differed from mine on the subject.

He placed on my heart the Old Testament story of Nehemiah, an Israelite who was a trusted servant and adviser to the King of Persia. Nehemiah’s heart was broken when he heard the news that Jerusalem’s wall and gates were in disrepair. A spiritual note sounded in me that spoke of God’s personal interest in the people and the work of the Canadian Bible Society; and, perhaps, a role for me during a time of transition.

I knew I needed to re-read the book of Nehemiah; and, did so the next morning. God still speaks through the Bible.

After reading the book of Nehemiah, I read it again; stopping to pray about portions that were impressed on me as being applicable to CBS.

While doing so, I remembered that, in 2012, Brian Stiller had given me a copy of his then new book Find A Broken Wall: 7 Ancient Principles for 21st Century Leaders. I had been at the first event where Brian had spoken about the 7 principles, and I recalled his book was based on the book of Nehemiah. It was also time to read Brian’s book.

Nehemiah’s call was to serve the city God loved. The wall of the city was in need of repair.

The Bible Society had been going through a restructuring process, substantially triggered by the change in legislative and regulatory requirements for federal not-for-profit corporations in Canada. And, a few months before the phone call to me the National Director of seven years had left the organization, followed shortly afterward by the Director of Operations.

We experience a sense of security when things stay the same. Change, especially significant change, can make it feel like the walls we have become accustomed to have tumbled down around us. We also know that life brings change. Often, and sometimes only after time to reflect, we find change can actually be good!

The example of Nehemiah was, for me, God’s call to be available to serve during the interim period while the Board of Governors was undertaking the process of reviewing and revising the governance and operational plan – the protective wall as it were – of the Canadian Bible Society.

In the ancient cities, the leaders of the city were only free to lead when they were able to meet at the open gates of the city with a sense of security, knowing that those gates were sturdy, strong and could be used for protection at a moment’s notice. The leaders needed to be able to meet in public, and in safety, to discuss the needs of the city and be available to address concerns brought to them by the people. Without the wall, the gates will not stand. Without the gates the wall will be vulnerable.

The people of the ancient city and surrounding area could go about their pursuits with confidence when they knew they were receiving good leadership and would find security within the wall of their city when required.

It’s difficult to argue with God when He speaks; especially when your wife agrees with Him! So, I said, “Yes.”

It was easy to see why God loved the people and ministry of CBS. Staff, volunteers and donors across the country all exhibited a commitment to Him and to the cross-denominational mission of the Bible cause.

It is uncommon to see people, even Christians, with a dedication that compels thinking past themselves, and beyond the interests of a particular geographic or confessional community, to serve the greater good; in this situation, advancing the sharing of the Scriptures.

In Nehemiah’s case, because the people had a will to do the work the walls and gates were rebuilt in 52 days and the success of the city was established for considerable time afterward.

With the work of restructuring and preparation of a new strategic plan well underway, it was left to me to consider the matter of the “city gates.” Nehemiah had been given a letter from his king to use wood from the king’s forests in order to rebuild the gates. But what did that mean in the 21st century context of a Christian ministry?

For me, the answer was found in the Bible.

When Jesus talked about building His Kingdom, whether in heaven or on Earth, He did so in the context of love. God so loved the world that He gave His only Son. Love the Lord our God. Love ourselves. Love our neighbours. Even, love our enemies. After His resurrection from the dead, Jesus committed, in love, that He would always be with those who loved Him – and He sent His Holy Spirit to be with us to guide us, in love.

We can have gifts, talents, plans and strategies, but, St. Paul reminds (in his first letter to the church in Corinth) there is a “still more excellent way.” “Love is patient and kind; love does not envy or boast; it is not arrogant or rude. It does not insist on its own way; it is not irritable or resentful; it does not rejoice at wrongdoing, but rejoices with the truth. Love bears all things, believes all things, hopes all things, endures all things. Love never ends… So now faith, hope, and love abide, these three; but the greatest of these is love.”

In his second letter to Timothy, St. Paul wrote that “God gave us a spirit not of fear but of power and love and self-control.” The security of 21st century Christians and Christian leaders is found in the power of His love and the presence of His Spirit. The King’s forests of today provide security in the certainty of His love. Nothing can separate us from the love of God.

It seems simple, but it can be easy to get distracted from His love and His presence; to drift into insecurity and fear when the familiar walls around us are tumbling down and what we considered certain gives the impression of having become uncertain.

The value in rebuilding the wall and gates of Jerusalem was not in the wall and gates but in the city and its people. It’s my hope that as its structure transitions, and as my time of interim leadership now concludes, the wake left from my transitory tenure will be an evidenced centering and security in the message of God’s enduring love for the people of the Canadian Bible Society that will encourage them in the continuing mission of promoting and encouraging translation, publication, distribution and use of the Bible.