Trinity Western University is opening a law school in September 2016. That’s not a statement of defiance, or wishful thinking. It’s a statement of fact.

TWU’s proposal was approved by the National Committee on Accreditation of the Federation of Law Societies of Canada and by the BC Ministry of Advanced Education. The “t”s are crossed and the “i”s are dotted.

As long as TWU opens the doors of its faculty of law in compliance with those approvals, the degrees issued will stand legitimately alongside every other accredited law school in BC. 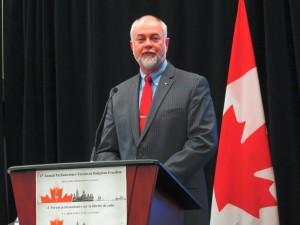 Speaking at the Parliamentary Forum on Religious Freedom

So, why are lawyers and law societies still bickering?

Law societies decide whether TWU law grads will be allowed to practice their profession alongside counterparts from UBC, UofT, Queen’s or McGill – or U.S. Christian law schools like Liberty U, Notre Dame or Baylor, whose grads practice in Canada.

The debate amongst those educated to understand and uphold the laws of our nation is, basically, whether the equally trained are acceptable.

Of course, if you graduate from UBC Law and hold the same definition of marriage as TWU, like me, you’re welcome in the club and won’t be asked to leave (yet).

Graduates from every other law school, holding a diversity of opinions on marriage, may practice law in every province and territory in Canada. But in Ontario and Nova Scotia TWU grads are singled out as not welcome. A quarter of BC lawyers passed a non-binding resolution calling on BC benchers to reverse the decision to accept TWU grads into the Law Society of BC (34% of LSBC members attended the special meeting; 77% in attendance voted for review).

So, just what is it that distinguishes TWU law school graduates from all others?

The education requirements are the same. Graduates of Canadian and foreign law schools who hold similar beliefs on marriage are accepted. The 2004 decision of the Supreme Court of Canada in Reference re Same-Sex Marriage stated a variety of opinions on marriage is constitutional and a hallmark of Canadian diversity, particularly recognizing sincerely held religious beliefs. In 2005 Parliament’s Civil Marriage Act stated that no person or community is to be disadvantaged by holding a belief on marriage different from that in the legislation.

So, what distinguishes TWU?

TWU is a private Canadian religious university that is opening a faculty of law – a complementary school to its faculties of nursing, business and education. The same TWU faculty of education was the subject of a 2001 decision of the Supreme Court of Canada in which the court stated [with comments in parentheses added by me],

… the proper place to draw the line in cases like the one at bar is generally between belief and conduct. The freedom to hold beliefs is broader than the freedom to act on them. Absent concrete evidence that training teachers [lawyers] at TWU fosters discrimination in the public schools [practice of law] of B.C. [or any other province], the freedom of individuals to adhere to certain religious beliefs while at TWU should be respected. The BCCT [law society], rightfully, does not require public universities with teacher [lawyer] education programs to screen out applicants who hold sexist, racist or homophobic [or anti-religious] beliefs. For better or for worse, tolerance of divergent beliefs is a hallmark of a democratic society.

And still a group of lawyers who are, quite frankly, bigoted against the school’s religious beliefs have mounted an emotional campaign, unsupportable on the law or the facts, to enforce politically correct conformity with their opinion; in violation of the constitution and laws they are sworn to uphold.