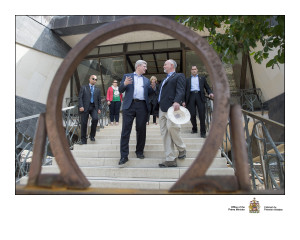 With Prime Minister Stephen Harper in Israel (at Capernaum)

A friend posted on social media about the $87 billion dollar spending estimates Parliament was asked to approve in a single afternoon last week. No budget. No fiscal update. No time. And, the Trudeau Government is in the midst of a separate spending frenzy of double that amount as a result of decisions made concerning the Covid-19 pandemic. My friend noted that $87 billion in $100 bills stacked one atop the other, like pages in a book, would extend 890 kilometres. That’s the distance from Montreal, Quebec to Windsor, Ontario.

The comment brought to mind that the $100 bill bears the image of Sir Robert Borden, Canada’s eighth prime minister and the last born before Confederation. Borden served ten years as Conservative leader in opposition before winning a federal election on his third try. His ensuing nine years as prime minister encompassed the challenges of WWI, the Halifax explosion, and the Winnipeg general strike. Borden’s government also introduced federal voting rights for women and passed the War Measures Act, the legislative model on which 2020 pandemic emergency measures implemented across the country are based.

It’s doubtful a contending twenty-first-century Canadian political party would have the patience to support its leader over a decade in second place. Most recently, the Liberal Party demonstrated its rejection of such a plan.

Prime Minister Paul Martin was done with politics after his defeat in 2006. Perhaps because the Liberal Party was also done with Paul Martin. While Martin was campaigning against Stephen Harper, key Liberals had already started the search for their preferred leader, a bilingual charismatic academic in the mould of Pierre Trudeau.

Martin’s successor, Quebec academic Stephane Dion proved to lack the charisma component. Twenty-four months later Dion was replaced by the intellectual human rights author, broadcaster and Harvard professor Michael Ignatieff. The search for the next Pierre Trudeau, which Dion was not, had next led to Ignatieff, who also fell short in the charisma category.

A few years in the opposition benches stimulated consideration that, along with bilingualism, more weight might better be placed on charisma than on intellectual accomplishment. The next leader would deliver photogenic charm just as the omnipresence of smartphones and the proliferation of social media were creating the new genus of selfie-taking virtual influencers.

Justin Trudeau, Pierre’s son, would stumble through the initial stages of Canada’s longest election campaign since 1872, but by the end of the seventy-eight day marathon in 2015 he had his messaging down pat. He delivered quotable quotes before mainstream media and partisan crowds like an experienced political leader; and, his selfie execution was unrivalled. Trudeau harnessed the power of both mainstream media and social media.

The Liberal Party had burned through leaders and interim leaders at a pace of under twenty-four months on average during nine years seated in the opposition benches, but found its champion in time for the 2015 election. Trudeau said the right things. He promised Canadians he would to do things differently. But after displacing Stephen Harper, Trudeau disappointed on key promises including electoral reform, financial management by running three sub-$10 billion deficits before balancing the budget in year four, and his personal commitment to transparency in government.

In 2004, McKay stepped aside as Harper took the steps to become leader. In 2017, Andrew Scheer succeeded Harper, overcoming thirteen candidates, including Erin O’Toole, to do so. Expectations were high that former Speaker of the House Scheer would defeat the Liberal prime minister whose four year tenure was tarnished by his broken promises and multiple ethical breaches.

Labelled by mainstream media for his conservative Catholic beliefs, Scheer was hounded not about policy but whether he would march in a gay pride parade, as Trudeau had done. Social media followed suit. Still, Trudeau’s Government was reduced to a minority. The Conservatives gained twenty-six seats and won the popular vote. But it wasn’t a win.

Peter McKay described the defeat as “having a breakaway on an open net and missing the net,” noting the LGBT issue “hung around Andrew Scheer’s neck like a stinking albatross.” He also declared he was not organizing to seek the leadership of the Conservative Party, nor trying to undermine the leader. Scheer stepped down within days of McKay’s remarks.

As the campaign to replace Andrew Scheer hit high gear, the field was narrowed to four. All lawyers. In alphabetical order: Leslyn Lewis, Peter McKay, Erin O’Toole, and Derek Sloan. In Toronto last week, they faced off at a pandemic-mandated socially acceptable distance from one another in the only scheduled debates of the campaign, one in French and the other in English.

As Conservative Party members select the party’s next leader, they have a critical decision to make. Perhaps more than the customary selection of a leader, this decision will seriously help or gravely hinder the party’s future.

Let’s begin with the debates.

The mainstream media – who in 2019 hounded Scheer and largely ignored Trudeau’s broken promises, ethical breaches (Kokanee grope, private-island Caribbean vacation, and SNC-Lavalin attempted interference with prosecutorial independence and subsequent expulsion of his former attorney-general and another female cabinet minister from the Liberal Party) and passed quickly over the campaign revelations that he had adorned himself with blackface on at least three occasions (as a high school senior, later as a river-rafting guide and again as a high school teacher at a private school) – was quick to endorse McKay.

Peter McKay won the leadership of the Progressive Conservative Party in 2003, with the support of a rival candidate with whom McKay had a written agreement that he, McKay, would not merge the party with the Canadian Alliance. Within months, McKay cut a deal with Alliance leader Stephen Harper to merge the two parties. Fifteen years later, McKay’s “open net” and “albatross” comments about Andrew Scheer alienated a portion of the party. Many have indicated they will not support the Conservatives if he is elected leader.

Erin O’Toole boasts an admirable record in the military, law and politics. He’s the only returning candidate from the 2017 leadership race, in which he captured 21% of the vote. O’Toole has courted the social conservative voters alienated by McKay, including a commitment to restore the Office of Religious Freedom, with his eye on their down ballot ranking.

Both O’Toole and McKay have noted service in Stephen Harper’s cabinet as evidence of their leadership ability. Both men have flip-flopped on key stated positions (McKay on re-criminalizing cannabis, now keeping the law as is, and O’Toole on ending, now not ending, fossil fuel subsidies) during the course of the campaign, and criticized one another for doing so.

Derek Sloan is a first term MP, who has presented himself as the social conservative that progressive conservatives won’t support.

Leslyn Lewis ran for Parliament in 2015 and lost. She was a just-under-the-wire replacement for a candidate who was caught on camera misbehaving (to put it politely). The only woman in the race, and the only black person, Lewis is a lawyer who also has a Masters in environmental studies and a Ph.D. in international law. The most frequently heard phrase from the other three candidates in both official languages was, “I agree with Dr. Lewis.” Media commentators remarked on how quickly Lewis progressed in a short period of time, and her noteworthy potential.

The decision Conservatives have to make between these four merits reflection on important questions. I pose them here without answer.

How important is the endorsement of mainstream media?

Is “best performance in a French language debate” the leadership litmus test? The Conservative Party won five seats in Quebec in 2011 when it formed a majority government, twelve in 2015, and ten in 2019. (With apologies to Francophones outside Quebec.)

Are Conservatives convinced they must select the candidate who can best debate Justin Trudeau in both official languages? What if Justin Trudeau isn’t leader of the Liberal Party in the next election, or perhaps the one after that? Basing the selection of a leader on the Trudeau factor means accepting that a profile to win has been established for the leader rather than for the party. Would Conservatives then be echoing the Liberal’s post-Martin search?

If Trudeau is indeed the Liberal leader in the next election, which candidate is the least likely to be target of attack by Team Trudeau, or for that matter by mainstream media? Social media?

Are Conservatives in a position to choose a leader that gives Canadians a contest about policies instead of personalities? If so, who might best address key Liberal policies on climate change, Indigenous reconciliation, international relations, and systemic racism?

All four candidates have said they will appeal to voters from outside the base, inviting them in to the big blue tent. But that involves more than opening the big blue doors. Foremost, which candidate is best able to hold the base? Then, which has the most potential to attract voters who are not currently supporters of the Conservative Party? Which candidate will have the appeal needed to do so in the urban and suburban communities of Canada’s major cities?

Does having served in Stephen Harper’s cabinet impress the variety of people the Conservative Party hopes to attract?

Given the influence of social media, which candidate has demonstrated a consistent and persuasive social media strategy?

Is the preferred candidate one who may be likely to step down if unsuccessful in the next election, or one who is likely to campaign another day (if not unceremoniously deposed for a loss)?

Over a century ago, Conservatives selected a leader who was willing and able to lead for the long haul, beginning in opposition. As my friend posted, 890 kilometres of Bordens stacked like book pages would be required to represent the federal spending estimates for 2020-21. Using the math from that unverified distance of stacked Bordens, to cover the projected federal debt by the end of the same fiscal year will require over 10,000 kilometres, a trip from Canada’s easternmost point in Cape Spear, Newfoundland, to its westernmost at Boundary Point, Yukon, and return. This represents an increase of 3,200 kilometres since Justin Trudeau, Canada’s twenty third prime minister, inherited a small surplus from Stephen Harper, the twenty-second. Is there a candidate with the determination to restore financial accountability, to change the Trudeau Government’s established, continuing, and projected spending trajectory?

Conservative Party members have an important decision to make. It will require considerations beyond who performed best in a few hours of late spring debates.

The Conservative Party found it challenging to replace Stephen Harper, who held together a mixture of social conservatives and progressive conservatives to form government. It could well be more complicated to replace Andrew Scheer.