Half a decade has passed since the almost expected, yet still shocking, assassination of Shahbaz Bhatti. Minister Bhatti was the first Christian member of Pakistan’s parliament invited into cabinet, where he served as Federal Minister for Minorities Affairs. 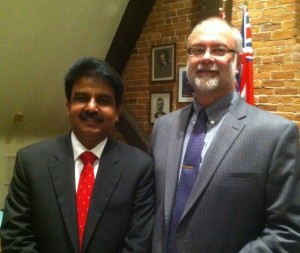 Just weeks before his death, Shahbaz was in Ottawa. That’s where I met him in February 2011. In conversation, Shahbaz shared that he had declined the Canadian government’s invitation to remain here and was preparing to head home. He knew his life was in danger. When I asked him about his needs returning home, Shahbaz stated that he did not desire a more trustworthy security detail; another offer from the Canadian government. He asked instead for prayer.

Shahbaz Bhatti was killed, execution style, on March 2, 2011, moments after leaving his mother’s home in Islamabad. His murderer has not been identified.

Death threats against Minister Bhatti had increased dramatically after he expressed support for Asia Bibi, a Christian woman who is still in prison after being sentenced to death in 2010. Her crime? In responding to a co-worker’s question about her Christian faith, Asia Bibi is alleged to have made a remark (which she denies) that was found by a judge to be an offence to the Prophet Mohammed. In Pakistan, the penalty for “blasphemy” against Mohammed is death.

A few months ago, I was privileged to visit China as part of a delegation that attended meetings with the leadership of both the national Protestant and Catholic churches registered with, and operating within the requirements of, the Communist government. The delegation also had a significant meeting with the Minister and senior officials from the State Administration for Religious Affairs, China’s department for oversight of religions and religious organizations.

This extraordinary opportunity confirmed for me the remarkable truth that the Church can thrive anywhere, even in cooperation with the requirements of a Communist government.

Years ago, I met with leaders of the unregistered house church movement who were visiting from China. They told me that they were experiencing increased freedom as they purposed and acted to respond to social needs. Their motivation was a statement Jesus made about one aspect by which He would judge the Church, “For I was hungry and you gave me food, I was thirsty and you gave me drink, I was a stranger and you welcomed me, I was naked and you clothed me, I was sick and you visited me, I was in prison and you came to me.” (Matthew 25:34-40)

In the setting of Canada’s democracy, we sometimes complain about government or the courts. But, we don’t face open, potentially deadly, hostility because of our religious beliefs. There are no blasphemy laws by which we might be imprisoned for a comment made to a co-worker. We are not confronted with the need to contextualize our religious practices in submission to a government that has either a religious or ideological belief that is determinative of both judicial appointments and judicial decisions.

Several of the more difficult New Testament passages for Christians are found in the apostle Paul’s letter to the Church in Rome. Among them, Romans 12:1-2 challenges Christians to be living sacrifices for God, transformed in our thinking to follow God’s will, not our own. Romans 13 confronts us with:

1 Let every person be subject to the governing authorities. For there is no authority except from God, and those that exist have been instituted by God. 2 Therefore whoever resists the authorities resists what God has appointed, and those who resist will incur judgment. 3 For rulers are not a terror to good conduct, but to bad. Would you have no fear of the one who is in authority? Then do what is good, and you will receive his approval, 4 for he is God’s servant for your good. But if you do wrong, be afraid, for he does not bear the sword in vain. For he is the servant of God, an avenger who carries out God’s wrath on the wrongdoer. 5 Therefore one must be in subjection, not only to avoid God’s wrath but also for the sake of conscience.

This is not a message dictating unquestioned subservience. Nor does it require collaboration with the government or compromise of Christian doctrine. But, Paul does appreciably limit the appropriate circumstances for civil disobedience (a topic to be addressed in more detail in an upcoming blog).

Working with and within the political and judicial system can be difficult, but that is what is asked of us.

Seven centuries before the birth of Jesus, four young men were abducted from Jerusalem by a conquering king – Daniel, Hananiah, Mishael and Azariah (also known by their Babylonian names: Belteshazzar, Shadrach, Meshach and Abednego). They held fast to their faith in God, refused to bow in worship to King Nebuchadnezzar’s golden statue, walked out of what should have been certain death in a fiery furnace, and found a place, within that foreign culture, to serve as leaders in the nation of Babylon; all the while, worshipping God. (see particularly Daniel 1 and 3)

Early Christians refused to bow to Caesar or his image, the Emperor having been declared to be a god. They kept the peace, were at one time put to death as entertainment, and contributed to their society. Four centuries after the death of Jesus of Nazareth, Caesar was displaced as god of the Empire by this same Jesus. In making this decision, the Emperor Constantine also granted legal freedom to other religions, provided they were not disruptive.

Without judicial independence and sound legal doctrine, the ideology of the state – whether religious or atheist – is determinative in the courtroom; and, judicial decisions become subservient to state doctrine. This is little different from the ancient Babylonian or Roman empires, and was understood by Paul when he wrote his remarks to the Church.

How Christians respond to cultural, societal and political constraints, as well as the decisions of courts – both just and unjust – bears witness to our character as Christians, a word that literally means “little Christs” (little anointed ones). Are we both believing in Jesus and behaving like Him?

The Church, both registered and unregistered, is growing faster in China than any other nation in the world. Asia Bibi’s lawyers continue to appeal the decision of the lower court, many around the world are intervening on her behalf with the Pakistani government, and her plight highlights that she is one of millions around the globe who face persecution for their religious beliefs. Instead of choosing the safety of a land foreign to him, Shahbaz Bhatti gave his life to work within the legalities of Pakistan’s constitutional structure “to serve the suffering humanity, defend principles of religious freedom, human equality, social justice and rights of minorities.” And, he asked me to pray for him.

The request of the persecuted is consistently that we pray. Pray that they – we – might be faithful to God and the Scriptures.