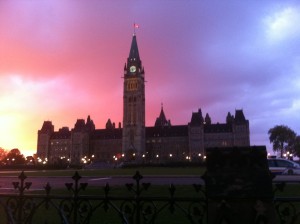 Yesterday, Part 1 was kind of a preamble about preambles, and introduction to the relationship of Canada’s constitutional preambles – 1867 and 1982 – to the current dilemma unfolding in our Parliament.

Have you visited Canada’s Parliament buildings? The House of Commons and Senate chambers have been temporarily relocated while Centre Block (their usual home) is under construction. Anyone who has seen the historic main entrance to Centre Block would describe it as spectacular. As you walk through the doors and up the marble steps before you opens up the massive Confederation Hall, on either side of which are symmetrically situated the House of Commons (to the left) and Senate (to the right) chambers, each with its own impressive foyer. Straight ahead from Confederation Hall is the Hall of Honour, a rib vaulted space with double arcades of lancet arches leading to the Library of Parliament.

Confederation Hall is the image projected in my mind when I read the words of then Chief Justice Antonio Lamer about the preamble to the Constitution Act, 1867 in the Supreme Court of Canada’s 1997 decision in the Provincial Judges Reference. He describes the preamble as “the grand entrance hall to the castle of the Constitution.” Lamer attended law school in Montreal in the 1950s, the same timeframe in which Bora Laskin (who was Chief Justice in the 1980s when Lamer joined The Court) was a law professor in Toronto leading the reinvention of Canadian legal education. Few law school graduates of the last four decades would contemplate Lamer’s noteworthy image as their understanding of the 1867 preamble. We’ll get to why in a moment. First, let’s address another question introduced by yesterday’s remarks.

What are the seven absolute rights Alford asserts are embedded in the unwritten Constitution of the United Kingdom, imported to Canada as the grand entrance to our constitution in 1867, and key to understanding the supremacy of the rule of law stated in 1982?

As secured against executive abuses and recognized by maturing Parliaments between 1225 and 1689, the seven rights are:

Each of the seven came to prominence as the result of historic incidents in which the executive exceeded its authority before eventually being reined in by representative Parliaments. In 13th century England, the monarch was the executive, supported by close friends and allies. In 21st century Canada, the executive is comprised of the prime minister (or premier) and his cabinet, along with the bureaucracies that cabinet members direct.

To recount the story of constitutional development, Alford necessarily begins before the signing of Magna Carta in 1225. He rests his case after describing the academic and jurisprudential battle between constitutionalists, who desire the history of the seven rights be known and that the rights remain inviolable among other historically significant constitutional principles, and absolutists, who would have us make room for the executive to breach those rights (and other historic principles) if declared to be in the national interest, an interest, by the way, which would be determined by decision of the executive.

In telling the tale, Alford notes Bora Laskin’s participation with two other law professors in the mid-twentieth century in an ambitious plan to transform the nature of legal education from that which taught the essential nature and influence of constitutionalist history to one which teaches from the absolutist perspective. Calling their idea “the modern law school,” the group of three initiated absolutist legal education at the University of Toronto. The shift would permeate Canadian law schools and influence the inclusion of section 1 in the Constitution Act, 1982, which gives the executive of government parameters by which it can infringe on the rights and freedoms provided for in the Charter. Section 1 reads:

The Canadian Charter of Rights and Freedoms guarantees the rights and freedoms set out in it subject only to such reasonable limits prescribed by law as can be demonstrably justified in a free and democratic society.

For those who might ask, “what about the notwithstanding clause,” please note that section 33 of the Charter gives authority to Parliament (and legislatures), distinct from the authority or actions of the executive, to override decisions of the courts concerning legislation passed by Parliament. The section 33 authority may result in conflict with some of the seven rights if the inviolable nature of those rights is not recognized in the deliberations of Parliament. The likelihood of such an oversight is enhanced if Canada’s independent judiciary also fails to appreciate the inclusion of the seven rights in, and their importance to, our constitution. Alford wrote Seven Absolute Rights precisely because the judiciary is increasingly composed of lawyers who have little to no awareness of the grand entrance hall. And who but the judiciary and lawyers would remind politicians of the same?

In effect, section 1 grants potentially excessive powers to the executive in the absolutist tradition and section 33 recognizes parliamentary sovereignty in our democracy in the constitutionalist tradition. The limitation on the duration of each Parliament’s term of service prevents executive control of Parliament from producing a dictatorship or absolute monarchy. (I look forward to Alford’s next book, which he promises will be on the twin pillars of the rule of law and parliamentary sovereignty.)

This background leads to a summary for explanation of where I began yesterday, being gripped by the breaches occasioned by Prime Minister Trudeau since he assumed executive leadership of Canada’s government, Canadians’ government. The breaches include, but are not limited to, his efforts to influence the attorney-general, who heads the independent prosecutorial branch of Canada’s judicial system. They also include his government’s more recent decision to award a near billion dollar contract on a sole-sourced basis to an organization with close ties to his family during a period of emergency in which the Prime Minister’s government has actively taken steps to reduce the operational authority of Parliament.

I’ll wait here for a moment if you want to re-read the seven absolute rights. Those rights were established through physical battle with monarchs (the executive) over the course of centuries. In loss, the monarch was then constrained by Parliament from repeating the abuses of public responsibility associated with executive overreach.

[If you choose to re-read the seven rights, here’s a marker to which you can easily return and continue.]

It is not only the current federal government that has engaged in executive overreach. In Canada, over the course of the last half century, by means of political party discipline (more severe than found in U.K. or U.S.A.) and bureaucratic dependence, the executive has progressively acquired inordinate power. Still, the executive does not have authority to influence the independence of a prosecution. Nor does the executive have authority to provide financial benefit to friends, or to bypass fiscal accountability controls instituted by Parliament in regard to expenditures and the awarding of government contracts.

Canada is in life-of-the-nation threatening danger if continuing efforts to expand executive power are not curtailed by exercise of the historic and constitutional authority of the electorate and of Parliament (and provincial parliaments). Parliament exists in our democratic structure to be representative of the citizenry, and holds the constitutional authority to rein in the executive. As noted above, both historically and in the 1867 and 1982 constitutional documents, Parliament is constrained to exercise its authority within a mandated maximum duration of five years. The frequency of elections for Members of Parliament, as well as the provincial/regional representation requirement for the Senate (found in section 21 of the Constitution Act, 1867) keep Parliament responsible to the people – of whom one-third did not concern themselves to vote in the 2019 election.

Absent in the thirteenth century when Magna Carta introduced constraints on the absolute authority of King John (the executive) was a widespread and active free press. Although Canada’s federal executive maintains a government funded news agency in the CBC, and has committed hundreds of millions in funding to the financially struggling media industry, the executive has not secured ownership of the media’s investigative journalists or opinion editorialists. The media has no role in Alford’s historical presentation, but in today’s Canada they perform part of the role that in history was played by knights, barons, and their allied armies.

The media has exposed and challenged the audacity of the executive, propelling awareness about executive abuses of power toward the day when Parliament, along with its representative committees and officers, will sit in its full authority and be called upon to consider appropriate action.

Will Canada’s Parliament have the resolve to do what is required to restore its intended authority, independent of party discipline, acting responsibly on behalf of the Canadian people, and not simply bow to the demands of party leadership? The institution of parliament functions best when Parliament’s members act responsibly on behalf of Canada’s citizens, with recognition of each member’s personal responsibility to the electorate. Will the electorate care enough to avoid the potential collapse or dramatic reshaping of Canadian democracy at the hands of an increasingly powerful executive?

Contemporary legal education may compromise law school graduates’ appreciation for the importance of history, constitution, and Parliament. Canadians generally may also have been lulled by the modern school’s focus on personal rights at the expense of comprehending the importance of our history and the institutions on which our democracy stands. The executive is counting on Canadians’ unfamiliarity with Parliamentary powers and procedures to pursue an agenda increasingly unrelated to the “peace, order and good government” for Canadians which is the basis for the federal executive’s role as stated in section 91 of the Constitution Act, 1867 (where the executive is referred to as “the Queen,” exercising authority through the Governor General in Council, a.k.a. the prime minister and cabinet, described in Part III of the Constitution Act, 1867).

In the current crisis, the careful framing of executive decisions, executive visibility and massive government expenditures have caused Canadians to think primarily of a prime minister meeting our personal needs, and to disregard the essential nature of, and challenges to, the institutional foundations for the free and democratic society in which we live, fostering the dangerous notion that we can take Parliament for granted. Only concerned citizens, and their concerned Parliament, can reverse that trend.

Whether meeting in the historic Centre Block or the temporary spaces of the West Block (House of Commons) and a renovated old railway station (Senate), our elected and representative Parliament is the heartbeat for the life of Canada’s historic form of democracy. If it stops beating, so does the Canada we know.

Canadians must not forget, and we must not let parliamentarians forget, Parliament matters.