Nigeria is a beautiful African country. However, it is divided into two almost even geographic regions based on religion. The religious majority in the South is Christian, and Islam in the North.

When visiting in 2011, I was forever changed by a heart-breaking brief conversation with a five year old. Our chat took place while he was enjoying his first ice cream cone, strawberry. 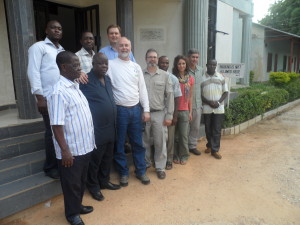 The little tyke was a student at a school for the children of Christian martyrs, those who had been killed for their faith in Jesus Christ. One of hundreds of students at the school, he had my full attention as he shared the details of watching the murder of his parents and sister; then, sitting by their bodies through the night until a relative removed him from the street the next morning. His family, well known Christians in the community, was killed as the result of mob violence that erupted after a Christian candidate was elected President of Nigeria in April 2011.

The circumstance of our conversation required that I hold back my tears, which wasn’t easy, until alone later that night in my room.

Nigeria is most often in today’s news because of the Islamic extremist group Boko Haram, which the government has been unable to rein in. Boko Haram was little known prior to April 2011, but boldly escalated their presence with the election of President Jonathan and have not retreated, even following his defeat by a Muslim candidate in the election of March 2015.

I had another life-impacting conversation, in a different walled compound, in Northern Nigeria. I was privileged to spend an evening with a Christian leader who is a former jihadist who started his almajiri training at the same tender age of 5 years, when he was apprenticed to a radical Muslim imam. Conversion to Christianity was, from the perspective of his previous religious compatriots, his death warrant. As a result, his identity and location are not publicized. He uses the pseudonym “Abdulmasi,” which means “servant of the Messiah.”

After dinner, Abdulmasi shared that our meeting the next day with over 100 pastors from Northern Nigeria – witnesses to Jesus in a hostile environment that shelters Boko Haram – was coordinated through word of mouth, as a safety measure. Each pastor was responsible to tell the next, using an established and trustworthy communication chain of mouth-to-ear communication only.

Late last year, I was discussing the current situation in Nigeria with a senior Christian leader from that nation. He stated his observation that the pastors of many of the churches terrorized by Boko Haram, outside of the North, were preaching against Boko Haram instead of preaching for Jesus. This prominent and well known Nigerian church leader shared that he walks freely on the streets, without security or concern, because he preaches for Jesus.

I noted in last week’s blog the situation in Pakistan, officially the Islamic Republic of Pakistan, where there are severe social and government constraints on Christians living out their religious beliefs.

I also referenced the situation in communist China, where the Church is growing in members faster than any other nation in the world.

Recently, Christian leaders in China have been in the news for a determined effort to place crosses on the roofs of church buildings. In China, it is forbidden to place above the roof line of buildings any symbols other than those of the Communist Party (e.g. the star) or the nation (e.g. the flag), unless the state symbols are also there, and higher.

In short, the placing of crosses or other symbols in this manner, creating in that culture the public perception of declaring something as greater than the communist state, is not permitted.

While in China last November, I saw a more than 10 metre high cross on the side of one church building and another prominent large cross placed several stories high on the front of another, but neither above the roof line.

Is the behaviour of pastors who are placing crosses on the roofs of their churches defiance that may inhibit the religious freedom of others? Or, is it Holy Spirit inspired civil disobedience that will advance religious freedom?

The Church looks different in these countries from its appearance in Canada, and other nations.

The forms of government, and resulting laws, are different in different parts of the world. As a result, the styles of Christian worship and opportunities to witness to one’s faith may also be different.

In Nigeria, even congregations associated with staid historic Western denominations are vibrant and charismatic in expression. I delivered the main message at the pastors’ gathering, and it was perfectly legal. But certain safety precautions are in order.

In Pakistan, the law prohibits disagreement with Islam. Sharing about one’s belief in Christianity can result in criminal charges; and, mob violence can rule alongside state officials. To preach in Pakistan, a country I have not visited, a Canadian would have to do so in private and hope not to be reported.

In China, the registered Protestant Church is non-denominational in expression. The church we worshipped in reminded me of a conventional Anglican form of worship, including organ and a full choir. The registered Catholic Church follows the traditional Roman Catholic form of mass. Unregistered churches can, I am told, be more charismatic in expression.

It is legal for Chinese Christians to share their faith, as well as Bibles, with fellow citizens. One of the world’s largest Bible printing companies, if not the largest, is in Nanjing. Amity Printing publishes Bibles for both international and domestic Chinese distribution. It is, however, illegal for a foreigner to bring Bibles into the country. Why would you need to? Bibles are readily available nationwide and foreigners can by them by the box and give them to churches for less than it costs to buy them in Canada. It is also illegal for foreigners to proselytize Chinese citizens without permission. To get my visa, I signed an agreement to not proselytize while in China. Chinese Christians are sharing the gospel just fine.

Globally, the Church is consistent in doctrine – the core doctrine of Christianity with variations on nonessential matters – or it would not be the Church. And, the Church is contextual in expression. Established in a Hebrew and Greek, Romanised culture in the Middle East during the 1st century, the Church has adapted to cultural expression (without doctrinal compromise) ever since.

Christianity is not a Western religion or an Eastern religion, the religion of the Northern Hemisphere or the South. Christianity is a relational religion – relationship with God and other people – that is enhanced by cultural infiltration resulting from life together. Cultural expression cannot, however, be permitted to compromise or contaminate the core doctrine of the Church.

Because of its relational nature with God and people the Church remains robust, alive and growing even in environments where Christians encounter social hostility and/or government restriction.

The Christian Council at Jerusalem concluded to accept the new converts in their cultural setting by equipping them with core doctrine and to “not trouble those of the Gentiles who turn to God” with traditional Jewish requirements. They also made sure there was a structure in place for continuing relationship. (Acts 15)

Early direction to the Gentile churches in differing legal environments, particularly letters of the apostles Peter and Paul who made “first contact” with these new non-Jewish Christians, also encouraged compliance with the laws of government authorities as part of their expression of faith. (1 Peter 2:13-14; Romans 13:1-7)