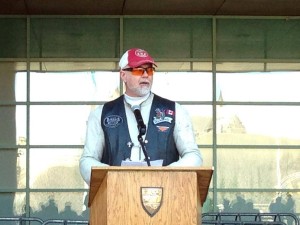 Speaking at the launch of Motorcycle Safety Awareness Month 2014

The fish is an “ichthus,” from the Greek word for fish, ΙΧΘΥΣ. It’s an acrostic for “Ίησοῦς Χριστός, Θεοῦ Υἱός, Σωτήρ”, (Iēsous Christos, Theou Yios, Sōtēr), which in English is “Jesus Christ, God’s Son, Saviour.”

In the early days of Christianity, when it was illegal to believe Jesus of Nazareth is the Messiah (“Messiah” being the English transliteration of the Hebrew word for “Anointed One,” although you may be more familiar with the English transliteration of the Greek, “Christ”), followers of Jesus used the ichthus symbol to point to where other Christians might be found, residing or worshipping.

I don’t have one of those Jesus fish on the back of my car because I’m neither a perfect driver nor a perfect parker. (Don’t get me started on those fish backed cars taking up two parking spaces!) In fact, I’m not a perfect anything; although, I am perfectly human.

I’m good with the Canadian flag. At least for now, there’s still space for quirky, Christian me among Canadians. And, yes, there are occasions when judgement will be passed on my flag.

I do belong to a motorcycle riding group. It’s mostly, but not exclusively, Christian riders but you wouldn’t know it from the logo. The group has the objective of supporting work that builds self-esteem for street engaged youth so those youth can find the support needed to re-establish themselves in a life that is not street dependent.

I also wear a Canada Bikers Church patch, because the Bikers Church is generally respected in the motorcycle community for accepting people as and for who they are. Hey, I ride a Honda (not a Harley) and have no tattoos but they still accept me! (And, yes, there are people who do not like the Bikers Church.)

No fish though, thank you. And, I avoid the prominent display of the word “Christian” on my clothing, too.

If fish are for you, that’s fine. Just remember, in like fashion to complaints about the bylaw enforcement officer who illegally parks to pick up a coffee or the police officer holding a cell phone to one ear as she screams past you on the highway, you’re likely to annoy people who think you go too fast or too slow or that you’re a failure at the proper execution of the fine art of parking your vehicle centred between two parallel lines painted on the ground.

On the flip side, I admit to a certain admiration for those who are willing to put themselves out there. The fish (or the word “Christian” on a motorcycle vest) can be a positive conversation starter. And, sometimes I feel that I’m not overt enough about my love for Jesus but that’s something for me to work out with Him. So far, the two of us are on good terms about it.

I’m glad He loves us each individually as we are and for who we are (and that he loves me too much to leave me the way I am). I’m also glad that He made us humans to live and worship in community; but doesn’t require me to belong to the right group or have the right advertising on my vehicle in order to be acceptable to Him.

Don’t mistake me for a closet Christian. I’m out there in a different way. There’s no secret about my Christianity. I’m not ashamed of the Gospel (Romans 1:16). And, I’m not afraid of the challenges that come my way because I follow Jesus. I do, however, want the opportunity to engage relationally with people before I’m pigeonholed beyond the obvious “white middle aged male.”

I even have friends who have been able to get past our initial introduction including reference to me being a Christian this, that or the other. In fact, I have a diverse group of friends, acquaintances and associates. Some of my friends aren’t fond of the fish-on-the-back-of-car people, but they’re okay with a fish-tattooed-on-the-inside-of-my-heart guy. And some of my friends, God help them, they have fish on the backs of their cars!