The last month has been a sprint, from arriving in Whitby for my Mum’s birthday – finding her in hospital instead of the apartment to which she would not return – to the up-tempo schedule for her celebration of life, clearing her apartment, and notifying government and corporate entities of her Homegoing. As we enter the first Advent season without Mum, allow me to share an edited version of remarks I delivered at the celebration of her life on November 17. 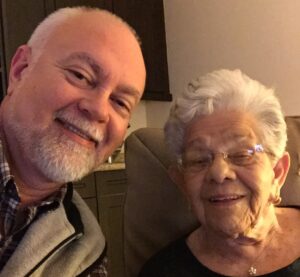 As I reflected on significant events in my Mum’s life, the theme of shorelines emerged. That thought reminded me of Virgil’s book length poem, Aineid. The poem tells the story of Aeneas, a hero who escaped the fall of Troy then sailed through a series of adventures seeking a new home, eventually landing in Italy and becoming the founding ancestor of those who established the Roman Empire. As Aeneas and his sailors left Troy, Virgil writes “they left with arms outstretched in love toward a distant shore,” and they did the same when they arrived on the beaches of Italy.

Different shorelines featured prominently in my mother’s life, here I mention three in particular: the shorelines of Barbados, Canada, and Heaven.

Mum was born in Barbados in the same year as Queen Elizabeth II. Mum had a healthy lifelong identification with our monarch, including maintaining a similar hairstyle, her hair being wavy like that of her monarch. Mum’s firstborn bears the name of the then Princess Elizabeth. Mum’s second born bears the name of another princess, Patricia, the granddaughter of Queen Victoria.

When I picture Mum in my mind, I see an image of her seated at the kitchen table of the house where I grew up on Birkdale Road, looking out the back window while eating either salmon salad on saltines, the sockeye salmon coming from a can, usually Clover Leaf brand, or eating marmalade on toast with a cup of tea. As Mum looked out over the Birkdale Ravine, with the sun shining on her from the big kitchen window, she reminded me of The Queen.

Somewhere along the line, her son got it into his head that because Elizabeth was six months older than his mother, Elizabeth’s demise would trigger a warning to prepare for his mother’s departure. Of course, the monarch reigns and Mum has gone to heaven’s shore.

My first book, Under Siege: Religious Freedom and the Church in Canada at 150 (1867–2017), had the following dedication:

This book is dedicated to my parents:
Lionel Noel Hutchinson (1924–2015)
and Thelma Elaine Wallace (née Greenidge) (1926–present).
Thank you for choosing Canada.

It was an adventurous decision to leave the beautiful white-sand shorelines of Barbados, with arms outstretched toward the distant shores of Canada. Not fleeing like Aeneas and the Trojan navy, but searching, with the future of two young girls in mind.

While Dad wasn’t long for the cold of Canada, Mum had become a Canadian of Bajan roots. When he went south, she chose to stay in the house on Birkdale Road for her two girls and her young Canadian-born son.

Shortly after Dad left, Mum was invited for lunch at the home of the pastor and his wife from the little church in Scarborough we attended. Hoping for support, instead the message she received was a request that she try to hold back her tears because her sobs were disrupting the Sunday church services week after week. In addition, concern had been expressed to the pastor by some of the married women that as a single mom with three kids Mum might be looking for a husband, and their husbands were off limits. My mother gathered her flock and left.

Mum poured herself into her family, her job at Coca-Cola, which would in time allow her to travel the world, and into being the support for others that she had been looking for herself. In her “spare time,” Mum became the vice-president of Parents Without Partners Canada, and then a co-founder of One Parent Families Association of Canada. She also volunteered with the Suicide Hotline for the Toronto Distress Centre, taking calls on our home phone at all hours.

Everyone who knew Mum experienced her generosity, family and strangers alike. Mum was a giver.

I have reflected on how fitting it was that Mum went to heaven on Remembrance Day, a day when many in the family had our thoughts fixed on my stepfather Lew.

When I was a teenager, Mum met and married Lew Wallace. Mum would be grandma to the Wallaces and Lew would be a grandpa to the Hutchinsons. Lew described himself as the black sheep among his siblings, who were involved in various capacities within the Church. For us, however, the church might best have been described as a building that was an optional location for weddings and funerals.

That changed for me in December 1981, and would change for Mum and Lew in September 1997. My wife Gloria, my sister Annette, her husband Phil, and I had all started attending services at the Toronto Airport Christian Fellowship, now called Catch the Fire Church, which was holding services Sunday morning and every night of the week except Monday. I remember Mum asking me, “What have you got your sister mixed up in that you’re all out every night?” And then saying, “I want to go to that church for myself.”

The Sunday morning that Mum and Lew joined us, Mum was uncharacteristically uptight until Jeremy Sinnott started to lead the congregation in singing Just a Closer Walk With Thee. Mum told me she relaxed when she heard a song that was familiar to her. After the worship service, Mum and Lew ended up sitting alone as the rest of us scattered to different parts of the building for a variety of reasons. When I was returning to the seats, I could see one of Gloria’s friends from Bible school was sitting with them. Joanne had explained to them that Jesus Christ was the only way to know God and to step onto the path toward heaven, and then asked if they wanted to pray together to accept Jesus as personal Saviour. As I walked toward them, I saw the three of them were praying.

In that moment, Mum and Lew turned their lives “with arms outstretched in love toward a distant shore.” Heaven shifted from uncertainty to certainty, from hope to promise, from myth to reality. And, the church was repositioned from a place of disappointment to a community of discipleship, a place to learn and become more like Jesus while worshipping God together.

For seven years it was Gloria’s and my privilege to be Mum and Lew’s pastors. We had the pleasure of watching their faith in Christ grow, and their interest in the Bible and things of God become essential in their daily lives.

That brings me to the message Mum wanted me to share with you.

You see, Mum’s new life in Jesus did not change her desire to be loving and generous to others, except to enhance her love and generosity. She also knew with certainty that church was a place to worship God, not a place to make a guest appearance or just put in some time every week. Mum knew that the Church was not a building, or about a building, but a community of people who were following Jesus together, each of us with our imperfections and walking in God’s grace.

On the evening before Jesus was crucified for our sins, He met with His closest disciples, including the one He knew would betray Him.

Following is a brief portion of what Jesus shared that night.

Let not your hearts be troubled. Believe in God; believe also in me. In my Father’s house are many rooms. If it were not so, would I have told you that I go to prepare a place for you? And if I go and prepare a place for you, I will come again and will take you to myself, that where I am you may be also. And you know the way to where I am going… I am the way, and the truth, and the life. No one comes to the Father except through me. (John 14:1-4, 6)

That’s what Mum wanted me to share. Jesus is the way. Jesus is the truth. Jesus is the life. No one can come to the Father in heaven except through having a personal relationship with Jesus.

Jesus accepts us for who we are. He offers Himself in love with arms outstretched to welcome us as we are. But following Jesus means we will be changed, because He has promised that by the presence of His Holy Spirit in our lives we will become more like Jesus in our character and in our love for others.

Before I close, I invite you to say a prayer with me that is like the prayer Mum prayed in 1997. There’s no magic in the prayer. If you mean it, it will change your life. If you don’t mean it, nothing changes. Nobody has to say it. And you can repeat it silently or with spoken words. It’s up to you.

Here is the simple prayer.

Jesus, thank you for loving me just the way I am. I give myself to you. Thank you that you won’t leave me the way I am, and will help me to become more like you. In your name, Jesus. Amen.

Now, as I close let me share some of my other favourite memories of Mum. These are more recent than those long ago days on Birkdale Road.

First, finding Gloria and Mum deep in conversation last August when John and I returned from an afternoon visiting a friend. Over the last several decades, both Mum and Gloria told me how they treasured those talks.

Second, watching my daughter Grace feed her Grandma marmalade on toast while Elizabeth June and Patricia Annette shared the hospital’s steamed salmon that Mum would not eat. Seeing my sisters and my daughter sharing a joy-filled moment together with Mum made me think of that image of her majesty on Birkdale Road, humble, generous and caring. In that moment, however, her majesty was surrounded by her princesses.

The third memory is from the last visit before we headed home to Ottawa, watching and listening as my grandson John prayed for his great-grammie while family joined hands around her bed. John has been memorizing Scripture, which he shared that day. Here are the words he prayed:

My most favourite memory, however, is a memory of the future. By God’s grace and in the love of Jesus I stand with my arms outstretched in love toward a distant shore, knowing that Mum holds out her arms in love to this now distant shore to welcome those of us prepared in Christ to join when our time comes to head heavenward.

Until then, I miss you Mum.