This week, The Evangelical Fellowship of Canada (the EFC), will celebrate half a century of evangelical Christian collaboration. It was in the autumn of 1964 that a group of Evangelical leaders decided to be more formal about the structure of exploring how they could be more effective in cross-denominational fellowship, as well as cultural understanding and engagement, than they could be separately. The EFC aligned itself with the World Evangelical Fellowship (now World Evangelical Alliance, which engages internationally for the planet’s 600 million evangelical Christians and has grown to over 120 member national associations). 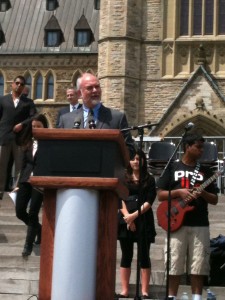 Speaking at a rally on Parliament Hill

It wasn’t until 1983 that Brian Stiller was hired as the EFC’s first Executive Director – a position that came to be called President when the board chairman came to be called Chairman instead of President. Brian initiated the magazine that is now known as Faith Today. He marketed the magazine through a coast to coast speaking tour encouraging Evangelicals to develop an understanding of our times and re-engage in the public policy process as Evangelicals had done in the early days of nationhood. In the seven and a half years I worked for the EFC I heard from several Members of Parliament and former MPs that the Stiller message shared in those days had inspired them to get involved in their communities and ultimately in politics. One said that when he needs to know his informed position on a serious moral matter, he checks the EFC’s!

When Brian became president of the then struggling Ontario Bible College and Seminary in 1997, which under his leadership became Tyndale University College and Seminary, the reins of leadership at the EFC were passed to Gary Walsh. Gary focused on building and nurturing partnerships within the Evangelical community, which when combined with the EFC’s public policy engagement added strength to both efforts and paved the way for rapid expansion in denominational affiliation.

Following Gary’s departure, Bruce Clemenger has been leading the fellowship since 2003. Bruce had been hired by Brian a decade earlier and pioneered the EFC’s Centre for Faith and Public Life, located in Ottawa. Bruce led during a period of affiliate expansion and, in October 2006, he hired me.

With 50 denominational affiliates, representing over half of Canada’s self-described evangelical Christians, the EFC has played a significant role in building cross-denominational relationship and partnerships as well as promoting biblical principles on matters of law and public policy. In addition the EFC has been a leader in interfaith conversation.

During my time with the EFC it was a privilege to appear before the Supreme Court of Canada on seven separate occasions to advance biblical positions – with sound legal reasoning to support them – on a variety of matters of public interest, particularly religious freedom; contesting for the practices intrinsically linked with our beliefs; the beliefs of millions of Canadians. The EFC’s engagement is practical and contemporary; advising the courts on socially supported legal policy that has the endorsement of millions of Canadians.

The range of public policy interventions over the seven and a half years of my personal experience as the EFC’s vice-president, general legal counsel and director of the Centre for Faith and Public Life offers a glimpse into the EFC’s longer history and a testimony to the strength of working for better, together.

Canada’s age of consent to sexual activity with an adult was raised in 2008 from 14 years of age to 16, providing a new measure of protection from sexual predators who were grooming 12 and 13 year olds for legal sex at 14. Efforts to legalize state sanctioned killing through euthanasia or assisted suicide were defeated in Parliament in 2010 and at the B.C. Court of Appeal inn 2013, with the Supreme Court of Canada having heard the B.C. case last month. In 2012 a National Action Plan to Combat Human Trafficking was implemented and, earlier this month Canada’s prostitution laws were amended to a more compassionate and effective model that targets prosecution of the purchasers and pimps instead of those being prostituted. 70% of human trafficking in Canada is for the purpose of sexual exploitation. And, in 2013, Canada’s Office of Religious Freedom was established in the Department of Foreign Affairs; an Office which has had tremendous impact internationally as an advocate for religious freedom within Canada’s continuing promotion of human rights.

There were other public policy successes and, of course, efforts that did not meet with as much success; building on earlier work of the EFC and strengthening the foundation for future efforts. Dozens of research papers, discussion papers, reports, committee appearances and countless media appearances reflected well researched and well-reasoned presentation that counter a longstanding stereotype of Evangelicals as out of touch Bible thumpers. The EFC is a rare organization that combines think tank like quality of research with lobbyist like engagement across political boundaries and top flight legal participation in the courts, all supported by a substantial constituency of Canadians. And if you don’t subscribe to Faith Today either in print or online, you’re missing one of Canada’s finest and most informative publications; regular insight into Christianity in Canada that will expand your horizons.

Congratulations to the denominational and ministry affiliate leaders as well as the staff and volunteers of The Evangelical Fellowship of Canada, both past and present!

May the EFC’s future continue to as wisely and effectively shine His Light!